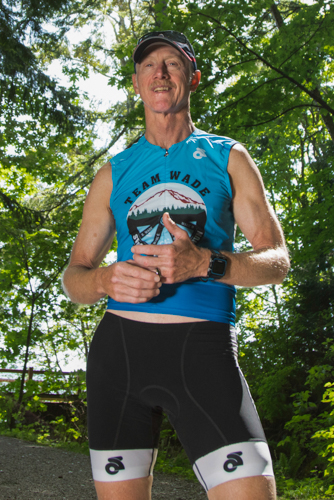 When the Skagit Valley community is in trouble, Steven Wade is there to help. Wade has served as a Skagit County Sheriff’s Deputy in Mount Vernon for the past 12 years. In 2011, after developing a malignant melanoma facial tumor, he became the one who needed the support of his community. Even heroes need time to heal.

Wade’s original diagnosis was on November 29, 2011. His tumor was located on his lower lip and chin, and was detected after his local doctor carried out a biopsy and immediately referred him for surgery at the Cancer Care Institute at Virginia Mason, in Seattle. When cancer margins were still not clear after surgery, Wade would undergo both concentrated radiation and chemotherapy treatment. After a year spent in Seattle for daily and then weekly treatment, his surgeon recommended the Skagit Regional Health Cancer Care Center for follow-up care.

As of March 28, 2017, Wade was pronounced cancer free. However, the road to recovery was lined with several hurdles. Now 58 years old, Wade is in better shape than most people half his age and his yearning and dedication to his health has only grown stronger along the way.

Before becoming a sheriff’s deputy, Wade spent 26 years in the timber industry. Before his cancer diagnosis, Wade’s part-time job was training for triathlons and competing on the triathlon circuit.

“Anywhere from 10-20 hours a week, I’d spend training, and then racing all around the world,” Wade said.

After cancer, he’s returned to his rigorous athletic schedule, albeit a little slower. “I’m also six years older, and many of my friends tell me I would’ve gotten slower anyway, even without cancer,” he said.

Wade was determined to maintain much of his physical fitness even while undergoing 15 months of treatment. “My doctors have said that my success may have been related to being in good physical condition prior to getting cancer,” he said. 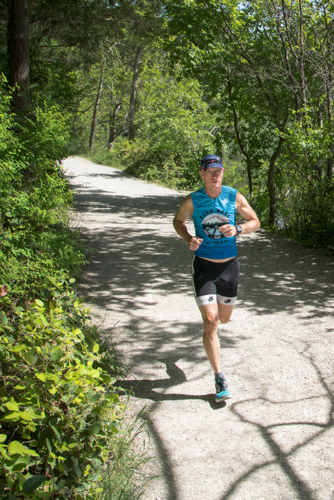 Swim, bike, run, repeat. Wade trains one to three hours a day in the activities that may have been responsible for the long-term strength he’d need to survive. When not occupied with the rigors of being a deputy sheriff, he varies his fitness routine with hiking and lifting weights. “That doesn’t mean that nowadays I don’t sneak a nap into the middle of my day,” he remarked.

Feelings of disbelief after diagnosis morphed into receiving loving support. “My wife was a stalwart force in maintaining the attitude that we were going to go about our business, just as we did before, and we were going to get through this, because it was just a bump in the road,” he said.

To make it across the finish line, Wade would need a team of external support. Being housebound for his last five months of treatment presented Wade with both physical and mental challenges. With a diminished immune system, his only option was to limit his exposure to illness by staying indoors. A friend loaned him a treadmill, and walking became the extent of his activity. Other family members pitched in to get him to appointments and aid in his mission to heal. “The beginning was tough,” he said. “But, I wouldn’t say it was tougher than the end.”

The immunotherapy drug available at that time, a drug that would lend an extra chance of survival to Wade’s condition, had one uncharted side effect. One day while biking down a county road at 15-20 mph, he had an episode of syncope – fainting – and he lost consciousness. As a result, he suffered a concussion that lasted several weeks, a dislocated shoulder and clavicle, not to mention extreme road rash. Healing from his wounds while still tolerating injections three times a week – injections that produced flu-like symptoms – was a lot to ask anybody to cope with.

“I had to pull back. All my energy was used to fight the cancer and I did very few workouts those last five months,” Wade recalled. 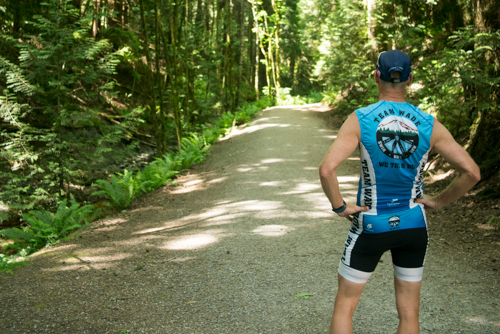 Recovering from his injuries, while maintaining some semblance of activity, was instrumental in Wade’s psychological as well as physical health. “One of the things that makes people less susceptible to depression is physical exercise,” he said. “I though it was very important, as did Dr. (George) Gjerset, that I try to maintain some physical fitness during treatment in order to push back the side effect of depression, or at least diminish it, as much as possible.”

Oncologist George Gjerset, MD at the Regional Cancer Care Center in Mount Vernon has always buoyed Wade’s optimism. After six years of working together, a mutual respect has been forged. Dr. Gjerset was able to figure out what made Wade tick and became “a coach” who presented treatments in a way Wade’s competitive side could overcome and win. Conversely, Dr. Gjerset was also being mentored. “He sees me as a, (even though he’s my senior), as a role model,” Wade said.

Wade said Dr. Gjerset has been inspired to implement some of the athlete’s dietary and exercise habits, while Wade has appreciated his provider’s way of communicating. “To be able to speak to me, in a language I identify with, it’s been really good for me,” Wade said. In turn, Wade said Dr. Gjerset has been impressed with Wade’s rare ability to stave off other complications and ailments without the use of additional drugs.

For Wade, understanding his condition through the years has been easier with Dr. Gjerset’s help. “He’s a numbers guy, like I am,” said Wade. “When I go to the doctor, I always leave with a piece of paper. It’s usually my blood work and I know what the numbers on that page mean. And that’s the kind of guy he is.”

Dr. Gjerset and Wade bonded over Wade’s trajectory of graphs and charts, and athletic goals that would lead them both to a greater sense of health, all the while positively influencing the course of one another’s lives. There are many kinds of heroes. Those who give us the strength to surmount the next obstacle are the best to have at the finish line. 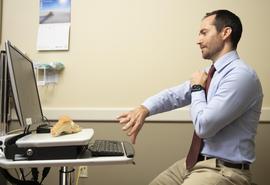 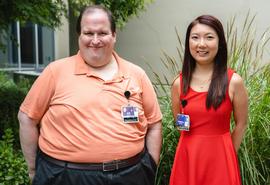 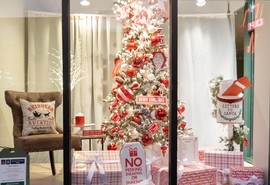